Last week, the International Monetary Fund (IMF) issued its April World Economic Outlook report. The headline was that the world’s real GDP would fall by 3% in 2020, which is a much steeper drop than in the 2008–2009 recession. For the purpose of projecting the tech market outlook, the more important numbers are real GDP forecasts for individual countries. The IMF projected that real GDP for the US would drop by 5.9%, for Euro countries 7.5%, for Japan 5.2%, for Canada 6.2%, and for Eastern Europe and Latin America 5.2%. China’s and India’s economies would grow but very slowly, less than 2%. For 2021, the IMF projected good rebounds in economic activity, with real GDP for advanced economies averaging 4.5% growth. But the IMF added a major caution to these forecasts: “The risks for even more severe outcomes, however, are substantial.”

As I’ve noted in prior blog posts, we are working with two primary scenarios for the economic/tech market outlook. Scenario A assumes a relatively short but sharp two-quarter recession in 2020, with growth resuming in 2021. Scenario B assumes the recession lasts into 2021 as pandemic containment efforts slowly ease back or recur if COVID-19 resurfaces or stubbornly persists. The IMF forecasts provide the economic underpinnings for our tech market forecasts in Scenario A. But we continue to provide tech market forecasts under Scenario B, reserving the fact that under this scenario, an economic downturn as long as the Great Depression is a remote possibility.

The real question is which will be more likely: the Scenario A tech market forecast or Scenario B projection? To answer that question on a country-by-country basis, I have created a four-factor model to assess the probabilities for each scenario: 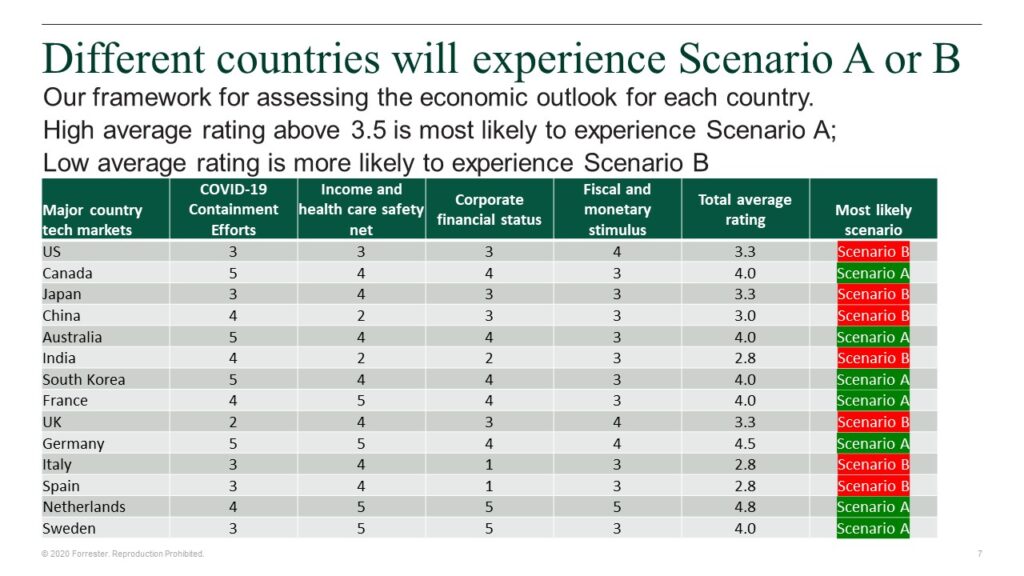 Christopher Gilchrist 17 hours ago
Technology is always vital to serving customers, and even more so in a downturn. In 2023, technology executives should optimize their budgets with customer and employee experience as the north star — both now and in the future. Here’s a peek at three actions we recommend in our new report “Navigating The 2023 Downturn: Technology Executive” so that tech executives can position their companies for market leadership when the rebound comes.
Read More
Blog

TIER: Use Forrester’s Tech Insights And Econometric Research To Succeed In 2023

Christopher Gilchrist 3 days ago
To help execs prepare for 2023, we just published a new report, Use Forrester’s Tech Insights And Econometrics Research To Plan For 2023, to give insight into what labor, investments, budgets, and productivity will look like this year.
Read More