One of the things I enjoy the most about being an industry analyst is that I've spent the past six years meeting some great developers. Personally, I’m not sure I could cover any other technology area then application development. The reason is simple: I see developers as a worldwide force for good (It's almost axiomatic, as the bad apples become "hackers"). Developers innovate, they create, they push technology forward — and they are fun to go have a beer with at the end of the day.

While writing for developers is fun, it’s not always easy. For the past few years, my topic coverage areas have sometimes felt a bit disjointed — almost as if there are two different developer communities out there that I deal with. In the past, I've referred to these groups as the "inside the firewall crowd" and the "outside the firewall crowd." The inquiries I have with the first group are fairly conventional — they segment as .NET or Java development shops, they use app servers and RDBMSes, and they worry about security and governance. Inquiries with the second group are very different — these developers are multilingual, hold very few alliances to vendors, tend to be younger, and embrace open source and open communities as a way to get almost everything done. The first group thinks web services are done with SOAP; the second does them with REST and JSON. The first group thinks MVC, the second thinks "pipes and filters" and eventing. I could go on and on with the comparison.

So why does this matter to you? I believe the advent of scale-out computing (in the cloud) and the proliferation of mobile devices everywhere make the technologies, architectures, and tactics used by the outside-the-firewall crowd critically important to enterprise application development. In the next few years, their world is headed straight to an IT shop near you. Today John Rymer and I are publishing a pair of research reports that describe this "Open Web" generation and the technologies that they use. If you're already in that group, our profiling will seem old hat, but we find that the world the Open Web developer lives in is unfamiliar to a majority of mainstream development shops. For these more traditional shops, the call to action is clear: If you want to be successful in the multichannel future of open APIs, HTML5, Javascript, app Internet, and xAAS, you need to get to know this new breed of Open Web developer. You need to understand how you will recruit them, adjust your SDLC to aid them, and create communities for them to collaborate.

Describing the Open Web takes far more space and time than I have here, but I’ll close with what I feel is one of the most importance parts of what we see going on. Three years ago I wrote a piece for the Forrester Leadership Board Application Development & Delivery Council on "Enterprise Web 2.0 Patterns." In it, I introduced eight common patterns we saw in use in outside-the-firewall applications. I’ve included one of them, the Web Façade, below. It’s not original — it’s a derivation of the original "Gang of Four" Façade pattern. The reason I include it here is simple – I see it occurring repeatedly in killer mobile applications and connected products. It’s the architectural foundation of an open enterprise platform strategy. I hesitate to say it’s the "new MVC," but understanding it and how Open Web developers are using the pattern is the first step on your own journey to the Open Web. 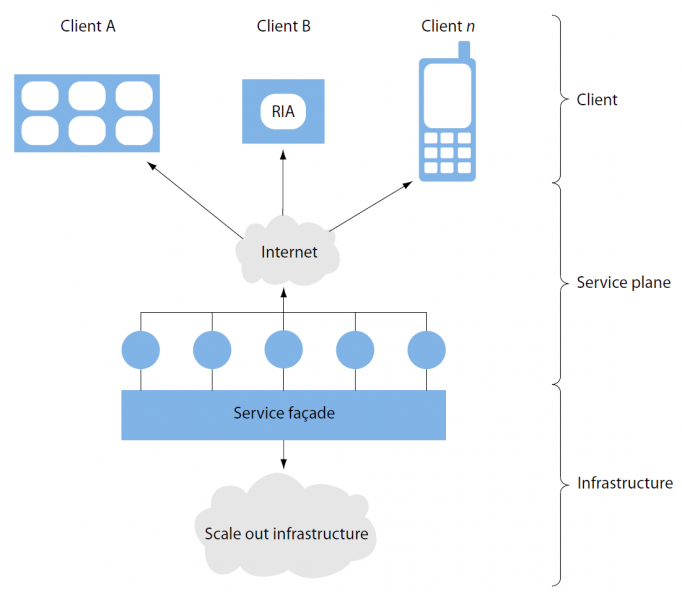 John and I expect to be writing about the Open Web throughout the rest of the year (no pun intended). There are many new topics that need further exploration (e.g., API management, new W3C standards that augment HTML5, and securing these enterprise platforms). If you like these ideas, live them in your development life, or have suggestions for follow-ups, drop us a note; we’d love to hear from you.

Is USD The HTML Of The Metaverse?

Andrew Cornwall 4 days ago
I was able to attend the NVIDIA GPU Technology Conference (GTC) and focused on the extended reality (XR) track. If nothing else, it was clear that the attendees were enthusiastic about the use of Pixar’s Universal Scene Description (USD) format as an interchange format for the metaverse and XR in general. There’s A Huge Need […]
Read More
Blog

Diego Lo Giudice September 7, 2022
A truly digital business quickly implements and continuously improves all its policies, processes, and procedures in software. There are many new practices and technologies that can help organizations innovate and deal with constant change.
Read More