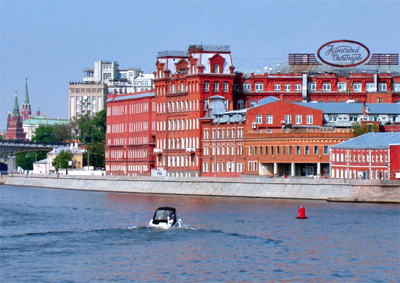 Today I attended a conference for Russian entrepreneurs organized by Digital October.  I’m going to digress a moment and describe the location which for a Moscow veteran is one of the coolest places I’ve seen in new Russia.  Digital October has taken over part of the old Red October Confectionary Factory, a red brick factory on the banks of the river on the outside with a state-of-the-art, loft-like business space on the inside.  The building has a view of the Kremlin and of the new church built on the other side of the river (where the world largest outdoor swimming pool used to be for those of us who knew Moscow before the church reconstruction).

Today's Digital October event, “The Art of Going Global,” brought together startup founders, VCs and entrepreneurs to discuss how to expand globally, including global marketing and PR, and getting funding from global VCs.

During the VC panel, Alisa Chumachenko, Founder and CEO of Game Insight, and one of the entrepreneurs in the audience, really grilled the panelists asking them to name their top geographical markets, top horizontal markets and top vertical markets.  Some responses were not surprising. Others were.

Geographical markets of interest varied.  Since we were in Russia, it was widely represented in the answers.  But really the sense was that innovation can come from anywhere and there is no single market or even a select few.  They cast a wide net.  The horizontal markets were not very surprising with social, mobile and cloud among the top picks for almost all of the VCs. Gaming was mentioned by a few.  And, storage was mentioned only by Alexandra Johnson of Draper, Fisher, Jurvetson – although with the growth of the others areas, storage opportunities are certain to follow.  But most surprising to me – and a pleasant surprise, I will add – was a comment about vertical markets.  Yes, financial services was mentioned more than once.  But without hesitation, Dmitry Chikhachev of Runa Capital, a Russian VC firm, listed education, healthcare and government as his top three vertical markets.  Basically, Dmitry is betting on the public sector.  As someone following civic innovation, I agreed.  The public sector is an underserved market and one in desperate need of innovative solutions to address the perennial challenges of governance.

Civic innovation comes in multiple forms from new practices and processes to new technologies and as importantly to new business models that facilitate these changes.  It is not new, and the need for it will never go away. Therein lies the opportunity for civic entrepreneurs to make a contribution.

I look forward to continuing the discussion on civic innovation with Dmitry and others.

Matthew Guarini December 1, 2022
After a period of scrambling, many technology leaders are looking to get their technology strategy more future fit. Here’s how you can do it.
Read More
Blog

Endpoint Management 2023: It’s Back To The Basics