Skip to content
< Blogs
Home > Featured Blogs > By The Numbers: Is Windows 8 Dead On Arrival In The Enterprise?

With the release of Windows 8, Microsoft is in the midst of its largest marketing effort ever, hoping to reach 2.1 billion people over the next several months. Because of its lukewarm initial sales, but with new tablets and convertibles on the way, Forrester clients are understandably asking how much attention they should  give it. Here's my take:

The data tells us two important things. The first is that Windows 8 is seeing roughly half of the interest from IT hardware decision-makers that Windows 7 saw at the same point in its release cycle. Only 24% of firms expect to migrate to Windows 8 but have no specific plans to do so, versus 49% for Windows 7 back in 2009. Only 5% of firms have specific plans to migrate to Windows 8 in the next 12 months, versus 10% for Windows 7 in 2009: 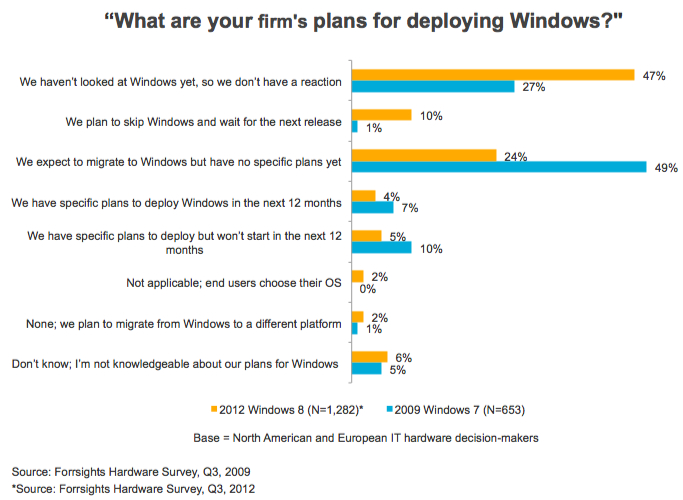 The second important thing that the data tells us is that Windows 8 has higher interest than we expected among employees, with a full 20% already saying that they would prefer Windows 8 on their next touchscreen tablet versus 26% for iOS. That bodes well for Windows 8's prospects for bring-your-own-device (BYOD) demand: 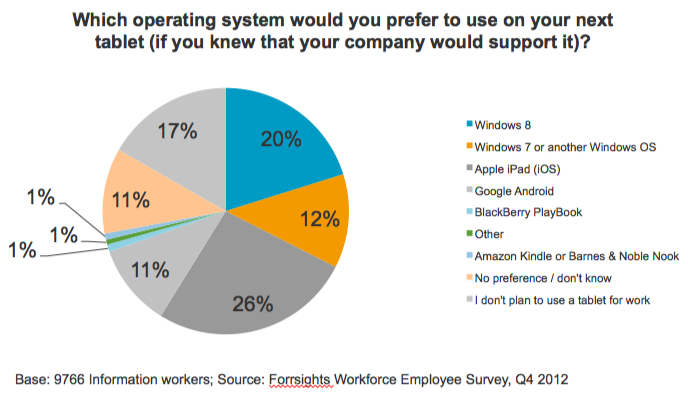 What It Means: Forrester does not expect enterprises to adopt Windows 8 as their primary IT standard. More on why in a future blog. But we do expect that employees will force IT to have a formal support policy for Windows 8 for employee-owned devices. Windows 8 will accelerate BYOD demand. Look for more from Benjamin Gray and yours truly in a report due out shortly.

Is Your Data Ready For AI?

Learn the 8 phases of shifting to an AI-first data strategy.

The Hyperscaler/GSI Relationship Has Forever Changed — Here’s How

Bill Martorelli June 16, 2022
By virtue of ever-increasing spending by enterprise customers, the cloud hyperscalers have been elevated to strategic partners of the first rank. This has forced many changes for enterprises and their global systems integrator (GSI) partners. Hyperscalers not only have earned a seat at the table but have gained significant influence on the behavior of their […]
Read More
Blog

Naveen Chhabra June 13, 2022
Elucidate Subscription-Based Hardware Offerings Public cloud innovations influence your technology decisions in many ways. Cloud pricing is shaping the pricing for on-premises data center infrastructure. I receive many client calls around evolving subscription-based hardware, and those discussions reveal their confusions. As you aim to make an optimal decision for your business, let’s develop an understanding […]
Read More