Infrastructure & Operations (I&O) professionals, in the age of Bring-Your-Own (BYO) technology, are keeping closer tabs on the comings and goings of the consumer market. Most of the devices they find their companies’ employees using come from consumer retail, whether from physical retail locations like the Apple Store or Best Buy, or online venues like Amazon or Dell.com.

Samsung announced yesterday that it will be opening “Samsung Experience Shops” — based on a store-within-a-store concept — in 1,400+ Best Buy locations in the US in coming weeks and months. By the second half of the year, Samsung will possess a significant retail presence tailored to its own devices and staffed with sales associates with greater knowledge of its products. CNET reports: “The shops in large-format Best Buy stores will include blue-shirted consultants who are employed and trained by Samsung, as well as Best Buy staffers who receive special instruction.”

Apple, of course, has enjoyed incredible success with its Apple Stores since they opened in North America in 2001. The Apple Store has been a powerful pillar of Apple’s overall consumer strategy because of:

These (and other) strategic advantages of the Apple Store have yielded fruit, including but not limited to:

Best Buy isn’t able to create such an experience for any individual vendor other than Apple. There is a certain irony to creating stores-within-stores inside Best Buy: The implicit implication is that selling through the “regular” Best Buy methods suffers from some kind of deficiency. Indeed it does: Best Buy populates its shelves and tables with a huge number of product SKUs, often without enough educational content or curation, with associates who are not necessarily intimately familiar with all products — making it hard for any given vendor to stand out. Well, except Apple, which has 700+ of its own stores-within-stores inside many Best Buy locations.

PHOTO: An early example of the Samsung Experience Shops from Dallas (source here). 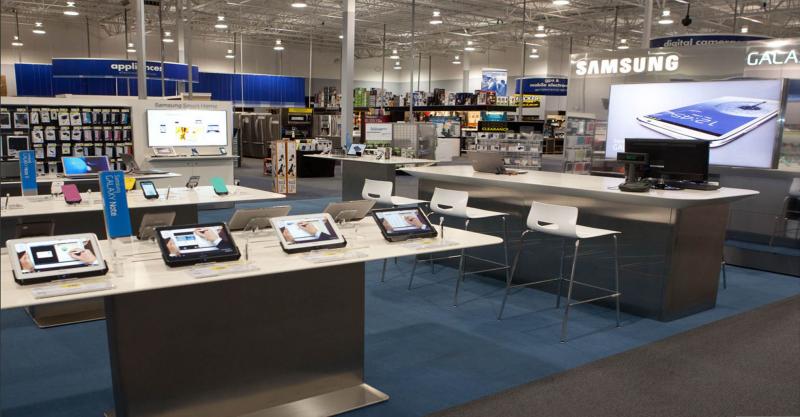 Samsung can’t match the Apple Store in every way with this move – but Samsung can significantly improve its strategic retail position. Even if lacking the same level of control that Apple enjoys, Samsung will improve its span of control over the customer experience. Samsung will be able to provide better sales support than its competitors (even within Best Buy itself, due to specialized sales training and its own consultants), a cleaner, more focused mise-en-scene, and will be able to show the inter-relationships between its devices (creating an ecosystem solution sale). Though store-within-a-store is perhaps a second choice compared with having its own stores, it represents a much lower level of risk financially. If the Samsung Experience Shops yield results, Samsung can always think about its own retail efforts later. Overall, with this move Samsung will raise the bar on its direct relationship with customers, yielding sales- and brand- benefits. It will be particularly interesting to see if Android tablets benefit from this move. Rather than being displayed in the multi-vendor, undifferentiated Tablet Central, Samsung’s Galaxy Tab will enjoy specialized retailing.

But, finally, a word on Microsoft. Microsoft has been moving gradually into the retail space – its Microsoft Stores include 30+ major locations and numerous kiosk-sized pop-up stores. Yet Microsoft isn’t finding the reach that Samsung has just engineered via this move at Best Buy. Right now, Microsoft’s partners are releasing numerous Windows 8 and Windows RT devices, everything from 10” ARM-based RT tablets to 12” Intel Core-based Windows 8 touchscreen ultrabooks that mimic tablets. The sheer diversity of product SKUs in the Windows 8/RT space presents opportunity for consumers to “find their niche,” buying a device that suits their unique needs. Yet who will explain the pertinent differences to them to help them choose? With too few truly effective retail stores in its arsenal, Microsoft should look hard at Samsung’s move and ask itself the question, how can we shake up retail for our own ecosystem?

Learn how to focus technology teams on a common goal — accelerating transformation.

Nicole Murgia 2 hours ago
If you’re like many retailers, you treat gift cards as a product — with product leads and inventory planning priorities. If this is true for your business, you’re in need of a gift card strategy refresh. Why now? Today’s advancements in payments tech and digitization mean that your gift cards can (and should!) be so […]
Read More
Blog

How To Navigate Retail Media Mania

Nikhil Lai 5 days ago
The question I’m asked most often is “Is retail media overhyped, or is it the next big thing?” This question comes, in part, from media coverage and forecasts, including Forrester’s, that project a significant share of ad spend — nearly $100 billion, according to Boston Consulting Group — being absorbed by retail media networks (RMNs) […]
Read More