Monday’s The New York Times offers a defense of authors’ rights from bestselling author and head of the Authors Guild, Scott Turow. In the piece, Turow interprets a Supreme Court decision that allows the importation of books purchased abroad for resell in the US, making it seem like all of Western culture would henceforth be at risk. Later the same day, I read a brief statement from News Corp in which the company threatened to make the FOX broadcast network a premium pay channel in order to get its just compensation for its creative works ahead of the likely decision that Aereo is not illegally capturing and restreaming broadcast content.

These individuals and organizations have the right to do what they feel they must as they pass through the phase known as denial. But may I offer this one small suggestion to help them through the stages of grief yet to come: Stop pretending that the foe you face won’t eventually win because it will. That goes for all of you. Digital disruption will eliminate your structural advantages someday, too.

We’ve been through this before, dating back to the first time the music industry sued someone to prevent the future. No, it wasn’t Napster or the users of BitTorrent in the 2000s. It was actually Diamond Multimedia, makers of the new PMP300 MP3 players, and the year was 1998. The argument then was the same as it is today: We, the people who currently benefit from an artificial monopoly in either the creation or distribution of value, don’t want that monopoly to end.

Well of course not! Who would? History shows that holders of monopoly control in even the smallest markets eventually come to believe that they deserve their monopoly benefits. They then conveniently forget that their historical control over scarce resources — say, broadcast spectrum which technically "belongs" to the public — does not come with a yours-forever, money-back guarantee. This is true for any monopolist. But as structural realities change with time, every monopoly eventually comes to its end, closing eras and shedding jobs like gas lamplighters, tollbooth operators, and travel agents. For all of these and others no longer gainfully employed due to such a shift, I offer my apologies but also this disclaimer: It wasn’t personal. It was just the natural end to a temporary inefficiency in the marketplace that you happened to benefit from. 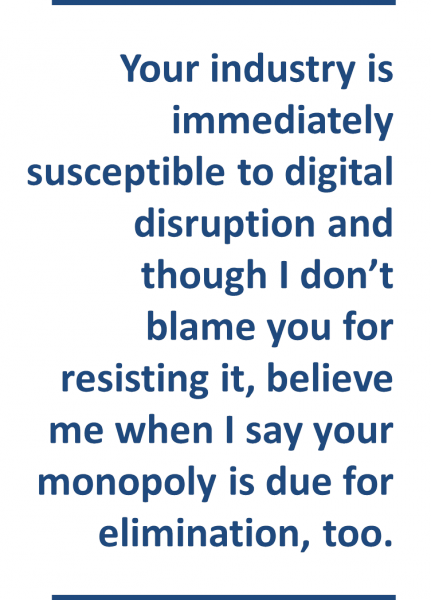 While this has always been true, thanks to digital disruption, it’s now expanding and accelerating, because even the smallest market inefficiencies that have even the slightest hint of monopoly opportunity are fair targets for digital disruptors. We see it happening in TV, in books, in pharmaceuticals, in retail. Everywhere you look, companies are upset that digital tools and platforms are making it possible for companies to invade their customer relationships, upset their traditional economics, and provide benefits to customers without having to pay the price to gain entry past whatever monopoly gates previously ensured scarcity in the industry, whether the broadcast of signals over scarce spectrum, the publication and distribution of physical books through a handful of bookstores, the expensive development of patentable medications, or the costly erecting of brick-and-mortar locations for distributing products. You name it, your industry is immediately susceptible to digital disruption, and though I don’t blame you for resisting it, believe me when I say your monopoly is due for elimination, too. History is on my side on this one generally, and digital is on my side on this one specifically. You will be digitally disrupted.

I will, too, by the way, so I’m not safe in some ivory tower here. I’m watching bloggers rapidly compile observations that people in my business used to spend thousands to collect in primary research. I watch as companies I never competed with before cull data from their regular operations and release it as analysis for free. I could moan about this, and on my worst days, I do. But it won’t change the fact digital disruption will win in the end. Instead of fretting about it, I can admire it and then roll up my sleeves and participate.

And so can you.

James McQuivey, Ph.D, is a principal analyst at Forrester Research and the author of the recent book, Digital Disruption. For more information and to assess your own digital disruption readiness, visit forrester.com/disruption.

Alignment is Key to a Great Annual Marketing Plan

The concept behind an annual marketing plan may be simple but building a plan that your organisation can get behind is not so easy. Join this free webinar to learn more.

Breaking The Green Market Opportunity Down Into Segments

Thomas Husson 6 days ago
There is no single green or sustainable consumer. Learn the value of segmenting your customer base by their green purchasing habits.
Read More