Skip to content
< Blogs
Home > Featured Blogs > Will Native Advertising Be A Tragedy Of The Commons?

One thing can be said definitively about native advertising: It is poorly understood.

If you’re feeling perplexed about native advertising, I’ve defined it in my upcoming report as:

Any form of paid or sponsored content that directly and transparently contributes to the experience of the site or platform where it appears, by aligning with the format, context or purpose of that site or platform’s editorial content.

You see native advertising in sponsored updates in LinkedIn, brand sponsored posts at the Atlantic or in links labeled “From around the web” at the bottom of most CNN.com stories, for example. To see some good examples, witness Sharethrough’s Sponsored Content Leaderboard.

What makes native advertising difficult to discuss, is that it is not a categorical definition (like anteater, shoe or airplane, which something either is, or isn’t). An example of native advertising can be “native” to varying degrees, depending on how well it fits into the site where it lives.

Examples: The advertising microsite that Monocle made for Hasselblad, then promoted across Monocle.com, looks and acts like Monocle content. It is native advertising that is very native to the site.

Livefyre CEO Jordan Kretchmer came to the same conclusion as I did; he says “Native advertising is not a thing; it is a strategy, creatively executed to fit the context of its surroundings.” I say, “Native advertising is an aim.” To me, brands and publishers need to work well together to arrive at a scenario where brands’ native advertising works well alongside the site’s endemic content or experience.

Unfortunately, this is not happening a lot right now. And that could be a big problem for everyone in the space.

Why? When native advertising isn’t very native to the site (or worse, not labeled as advertising), it contributes to reader distrust. Readers get the impression that either the publisher or the brand or both are trying to fool them. That’s a poor foundation for communication, and will impact readers’ expectations. They’ll stop wanting to interact with native advertising.

At a site-by-site basis, this would be a problem for that site, or that brand. But people on the Web generally don’t have unique behaviors site to site; they relate to web pages much the same way, no matter the site.

The simplest way to illustrate how this would play out is to compare to Jan Benway’s and David Lane’s studies of banner blindness. 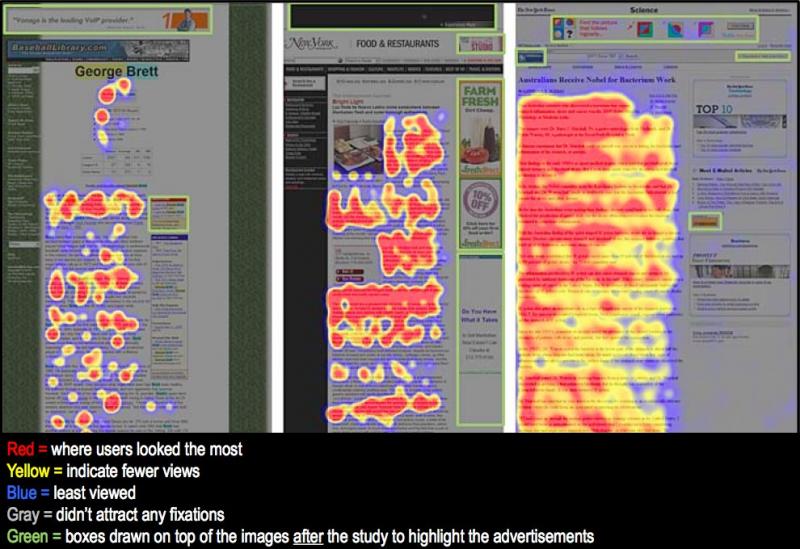 Because banners diverged so strongly from what web-page viewers wanted from the page, the viewers became blind to the banners. Though native ads have escaped the dreaded right rail, there’s still no reason to believe users could not become effectively blind to them.

What we have here is a tragedy of the commons. The collective good that brands and publishers must manage is readers’ trust in content. However, both brands and publishers have individual incentives to squeeze promotional copy into spots that look like editorial (making for poor native advertising but delivering a brand message) or to mislead readers into clicking on poorly labeled native advertisements.

Procter & Gamble marketing director Chris Laird was quoted at the FTC workshop on native advertising thus: “If it’s not transparent, and it erodes consumer trust, the ROI falls and we just won’t invest in it anymore.”

Does this mean native advertising is doomed?

Though I made the argument that poor examples of native advertising will poison the well for all, I believe we’ll see some stratification. At the top end, some publishers will align with and educate savvy brands to create valuable branded content contributions to their sites, and bring their readers along. At the bottom end, you’ll have publishers stuck with what’s commonly called “belly fat ads” (the kinds of terrible direct-response ads that are known to pop up in low-value placements). Between the two will be a few layers of varying performance.

The easiest way brands will be able to differentiate each layer? CPM. On sites where native advertising works, publishers will be able to demand very high CPMs, with highly satisfied brands. At the low end, you’ll see either low CPMs or performance-driven CPC.

Alongside these walled garden strata, brands can use native advertising networks or platforms such as Outbrain, Sharethrough or Nativo that position content across dozens or hundreds of sites. They put the content quality burden directly on brands or their agencies, as publishers become pure supply-side players. Furthermore, this kind of distribution will be more universally impacted by the tragedy of the commons I’d mentioned (widespread reader distrust will hurt them all).

Function-First Tech Buying: The Way Forward In A World Of Legacy Tech Systems And Ecosystem Bloat

Emily Pfeiffer 4 days ago
In our new report, Forrester establishes standards for which technical functions are core (required) and common (often included) to the primary categories of commerce tech.
Read More
Blog

Apple’s BIMI Support = Time To Get Serious About DMARC Enforcement

Jess Burn September 19, 2022
Apple announced on September 12 that its email clients for iOS 16 and macOS will support a broad industry effort to combat brand spoofing and impersonation by implementing Brand Indicators for Message Identification — BIMI for short. This announcement further reinforces Apple’s commitment to security and privacy for its users and its earlier Lockdown Mode […]
Read More