[Recently, I wrote that overly optimistic or pessimistic predictions of native advertising’s future were the result of vast (and naïve) assumptions. I concluded that a more accurate prediction would not hinge upon grand theories about how great native advertising is or isn’t, but rather a wily assessment of many factors – the foxlike approach of Isaiah Berlin’s Hedgehog and the Fox. I said I’d offer such a foxy assessment. Here’s that assessment.]

1) Native advertising is the best thing that could have happened.
According to this theory, native advertising at last frees the world from interruptive or parasitic advertisements and allows both the publisher site and advertiser to work toward a shared goal: the best possible experience for the user or reader. Success will be measured directly by readers actually choosing to consume stuff from brands, which means it’ll all be worth more and publishers will earn a bigger cut.

2) Native advertising is the worst thing that could have happened.
According to this theory, native advertising depends fundamentally on confusing the reader into clicking on an advertisement by disguising it as unpaid site editorial. As a result, readers will lose their trust in the sites’ editorial integrity and abandon the site. This loss of integrity will destroy the halo effect, whereby a site’s editorial integrity reflects positively on the advertisers associated with it.

True hedgehogs could expound on these arguments at length (they have a tendency to do that), but I’ve represented the basic positions.

It won’t surprise you when I say that they’re both wrong. That native advertising is just something that is happening. That it’s being done for better or worse around the Internet. And that there are some clear trends emerging if we just look at where it seems to be working for readers.

That’s the foxy outlook. Anticlimactic, I know. That’s why foxes don’t make headlines as often as hedgehogs. I’ll expand a bit on the analysis.

If native advertising’s success depends on how readers react to it, let’s start with readers. Here it’s important not to take a monolithic approach. Readers come to content from different backgrounds, with different expectations, for different purposes, in different contexts and from different sources.

So you could draw a series of scales for native advertising’s success site by site, based on the audience. How old is the audience? How accustomed is it to native advertising – at that site, and in general? Are readers accustomed to coming to the site to read authoritative news articles only, or are there other things to do on the site? What proportion of readers come direct to the site (entered URL or via email newsletters) and what proportion come from search or social channels? Is there a clear editorial “voice” to the site or not?

All of these affect how readers respond to native advertisements appearing on the site. Map a site against these factors and you’ll see a different degree of acceptance for native advertising, in principle, and a different curve of changing attitudes over time, in practice. 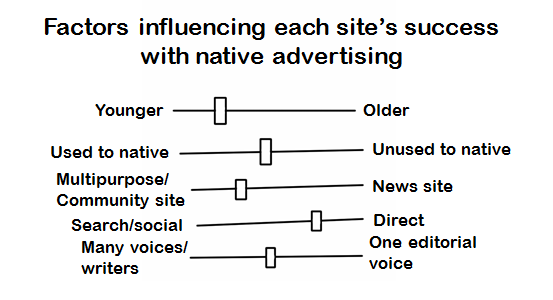 Short of changing the purpose behind its site, there’s little most publishers or site owners can do about these audience factors. They have the audience they have. But there are other factors that publishers and advertisers do control. These are:

Clarity of source is an even bigger minefield. Thanks to garish banner ads and other cruft, publishers have trained readers to ignore everything on their sites when they arrive except headline and body copy (at least until they finish reading the article or give up on it). Result: Readers seem to ignore that big “Sponsored by” or “Promoted by” disclaimer. And the different color? Please.

Will publishers and advertisers get this right for readers (and thus bring on more and more native advertising)?

Again, this is not a yes/no question. Some will. Some already are. Last week, Jonathan Glick of Sulia gave a name to sites that seem to make it work: Platishers ( no, he isn’t proud of his neologism). It’s a portmanteau of platform and publisher, and describes publishers who behave like technology platforms, allowing many parties to publish there. Think of Huffington Post, Gawker, Medium or Buzzfeed.

Platishers benefit by quickly solving three of the four factors mentioned above. By allowing brands onboard as legitimate publishers (who often publish for free, then pay to promote), the platisher quickly resolves the stance, clarity and placement issue. The quality problem then gets left to advertisers: the worse the quality, they more they’ll have to pay to promote it. That creates a learning curve.

Given these two different approaches, we can map a further two success rates for native advertising, inside a range – one for publishers and another for platforms or platishers. And it gets pushed to the right depending on the learning curve of the advertisers: 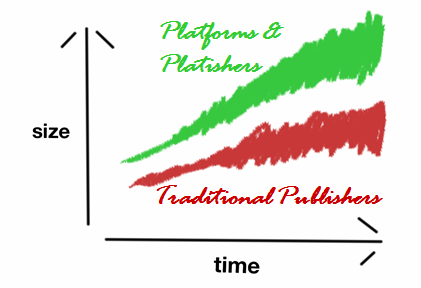 A fox would look at native advertising today and see not one thing but many things happening. He’d be unlikely to say native advertising would fail or go away, because it already exists and is growing. He’d conclude that some publishers do better than others with it, and that those publishers who do well draw more advertisers, more revenue and then more readers in a virtuous circle.

It’s more satisfying to say “native advertising will grow to become a $3 billion market by 2017” but it’s also misleading and probably very incorrect. Native advertising will succeed or struggle site by site based partly on design decisions and partly on advertisers’ skills and ability to learn. When assessing native advertising’s prospects, it’s more accurate to assess each site and make wary, short-term estimates based on a broad range (given uncertainty around how readers will actually react). One number, no matter how smartly calculated, is just wrong.

Jay Pattisall 2 days ago
Despite an ever-expanding universe of marketing channels and complexity, the creative process utilized by most marketers and agencies has remained unchanged for nearly a century. Creativity in today’s marketing and agency setting is reliant upon instincts. “Marketing itself is intuitive,” says Doug Zanger of The Martin Agency. Yet an intuition approach alone to creativity produces […]
Read More
Blog

Nick Barber February 22, 2021
Agile content management systems (CMSes) build on the momentum of nearly 30 years of delivering modern, digital, internet-powered experiences. With a nod to both developers and practitioners, agile CMS seeks to enable collaborative, iterative approaches to content and experiences that satisfy both sides of the house. Make no mistake, though, agile CMS is more than […]
Read More