Skip to content
< Blogs
Home > Featured Blogs > The Data Digest: Knowledge Is In The Eye Of The Beholder

Language is evolving; the written word is giving way to visual vocabulary.

Interpersonal communications are shifting from being text-based to image-based, and you don't have to look far for the evidence: We spell using the Emoji alphabet; we comment with photographs; we engage through pictures.

Therefore, it’s no surprise that consumer adoption of visual social networks is growing and that social chatter is becoming increasingly pictorial. Forrester's Consumer Technographics® data shows that US online consumers across generations are interacting with content on Instagram and Pinterest more than before: 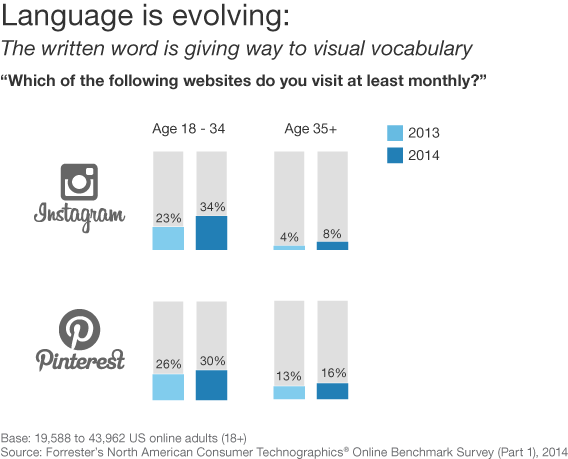 As consumers become increasingly versed in the language of visual content, curated images become a powerful means of expressing opinions, conveying emotion, and recounting experiences. As a result, pure text analytics no longer suffice to interpret social chatter; instead, insights professionals have an opportunity to mine the wealth of media-rich data that increasingly pervades social networking sites.

According to her latest report, my colleague Allison Smith predicts the emergence of the visual analytics landscape. She notes that, while still in its nascent stages, visual social analytics will become key for brands to understand and connect with their customers. According to Allison: “Customer insights execs that already analyze visual social networks prove the value of participating on these new web properties. Early adopters have found visual networks much more ‘shoppable’ than textual networks and can attribute sales directly to their participation in the visual Web.” Ultimately, to speak the language of your customer, what is seen is just as important as what is said.

Drive Engagement With Your Digital Experiences

A five-step breakdown of how to get customers to embrace new digital experiences.

Check It Out
Blog

Michele Goetz 4 days ago
Read our 2023 predictions for data mesh: Clarity, challenges, more confusion, and opportunities are all just part of the journey.
Read More
Blog

Jacob Morgan November 28, 2022
Forrester’s European open banking forecast predicts a doubling of the adoption of open banking across countries, and use cases, from 2022 to 2027.
Read More