Forrester has been analyzing device adoption since the launch of its Consumer Technographics® studies in 1997. Over the years, it has become evident that although demographics and attitudes influence technology adoption, these elements alone do not predict consumer behavior – subtle factors like context and psychological needs must be taken into account to piece together the technology adoption prediction puzzle. This is because of two essential contradictions that exist between:

Take wearable technology as a (timely!) example. A blend of Forrester's Consumer Technographics quantitative and qualitative data shows that while interest in wearable devices is growing remarkably, consumers say they are hesitant to use the technology. However, as consumers begin to experience the comfort and connection these gadgets provide, adoption numbers trend up: 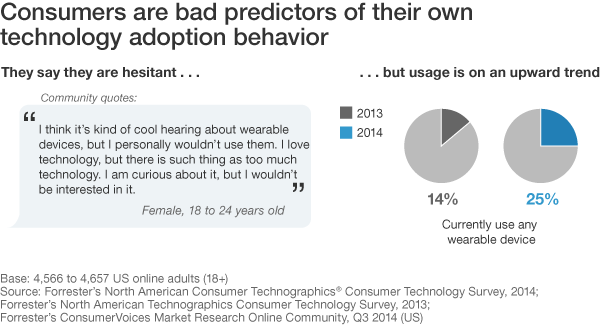 Consumer behavior can be counterintuitive: Stated intentions are not sufficient to understand technology adoption. Ultimately, to predict device usage, insights professionals must evaluate the contradictions in consumer behavior and psychology by integrating “hard” and “soft” data. In my recent research report, I explore the solutions and implications of this approach further.

In a world where the pace of innovation is accelerating exponentially and where consumers’ acceptance of new technology is quicker and increasingly contextual, the need to predict how and why consumers adopt technology is more challenging – and more important – than ever.

Are You Testing Your AI Enough?

Bad AI can erode trust. Learn why (and how) to properly test your AI-infused applications.

Use Marketing Analytics To Support Your 2023 Marketing Strategy

Tina Moffett January 30, 2023
Marketing analytics is the practice of measuring, managing, and analyzing data from marketing initiatives — including channels, programs, campaigns, and tactics — to improve marketing effectiveness and identify opportunities to optimize short- and long-term objectives. You probably already have basic marketing measurement approaches running — whether it’s last-touch or a 30/60/90-day analysis of your email […]
Read More
Blog

Boris Evelson January 5, 2023
Learn the the two most significant trends that Forrester has been observing in the data and analytics space and what their implications are for your tech organization.
Read More