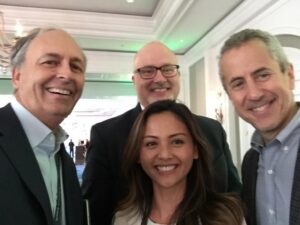 That’s Danny Meyer, the CEO of Shake Shack on the right, and in the middle is Gwen Uyen Nguyen, from the crowdfunding company Indiegogo (I’m on the left with Dave Evans from Forrester in back). What were companies like Shake Shack and Indiegogo (and Tesla, New York Life, Pure Insurance, Kimberly Clark, Oppenheimer Funds, PBS) doing at the Forrester Age of the Customer Executive Summit?

Simple — to talk about how they win, serve, and retain their increasingly empowered customers. The CIOs and CMOs who attended our exclusive event understand that the rules of their business have changed — that the customer has become, in the words of one executive, “…the protagonist in all of their stories.” A lot of ground was covered (you can watch videos from the event here) but below are my five favorite learnings:

Lesson One:  Lubricate paths between customers and product builders. JB Straubel, the CTO of Tesla, stated that his company owns its dealers and repair shops because they want an un-interrupted feedback loop between its customers and its engineers. Better loop, better cars.

Lesson Two:  You have to work differently to achieve customer-obsession. According to James McQuivey of Forrester, this is how you work now:  1) Simplicity, not complexity. 2) Immediacy, not latency. 3) Aligned, not siloed. 4) Agility, not rigidity. Sounds obvious. but in reality hard to achieve.

Lesson Three:  CEO commitment mandatory. The CMO of Oppenheimer said it best: “We made a lot changes to win more B2B customers, but it didn’t come together until a new CEO arrived who could see that our world had truly changed.” Much of customer-centricity is about cultural commitment — impossible without the CEO being all in.

Lesson Four:  Keep it simple stupid. Danny Meyer from Shake Shack was clear and direct: “We are all doing the exact same thing: No matter what your business is, your product would not exist if it did not solve problems for people, if it didn’t make people’s lives easier, more enriched and better. And it’s got to work. It’s those two things: It has got to be necessary and it has got to work.”

Lesson Five:  Every executive team requires a customer advocate. Forrester has recently completed some amazing work on what the customer-obsessed operating model looks like — you can find it here (summary unless you are a client). There’s lots of findings, but here’s a big one: At customer-centric companies we always found a dedicated customer advocate in the C-suite. And they are not “About to retire” window-dressing — they have power, gravitas, and political connections. The most effective ones are part of a line of business — they aren’t staff.

Amazing event, with real-world action from execs who grasp the customer sea change. I’m already looking forward to November 1-3, 2016 at the Ritz-Carlton in Laguna Niguel. It’s invitation-only for 150 CIOs and CMOs — if you’re a Forrester client start lobbying your account manager for an invite now…

George Colony 5 months ago
This week, Forrester’s Board of Clients was in Cambridge. This amazing group advises the company on strategy, new products, and improving our service. Over the years, they have had a big influence on how we work and where we are going — this year, the discussion was particularly valuable. I always host a dinner with […]
Read More

The Power Of "Now" CX

George Colony 6 months ago
The value of real-time CX: differentiation, growth, and better retention. Learn more about the next frontier of CX and why Forrester developed FeedbackNow 2.0.
Read More