This week in New Orleans, Microsoft launched it’s first conference aimed squarely at business leaders as the company looks to move beyond the department of the CIO. Envision 2016 replaces Microsoft’s previous Convergence conference and comes on the heels of “Build2016” the previous week.

As a guest of Microsoft, I had two reasons to attend Envision: First, to hear from CEO Satya Nadella and other Microsoft executives; I wanted to better understand their business strategy going forward, specifically as it relates to enterprise customers. Secondly, I had the opportunity to provide feedback to Microsoft leaders on its enterprise marketing strategy.

It was no doubt clear to attendees that Microsoft wants a relationship with enterprise customers beyond the office of the CIO. Based on Satya’s opening keynote, there is a recognition that Microsoft must become a more strategic business partner, helping today’s CIO clients work alongside their line-of-business peers to deliver on the promise of digital business. 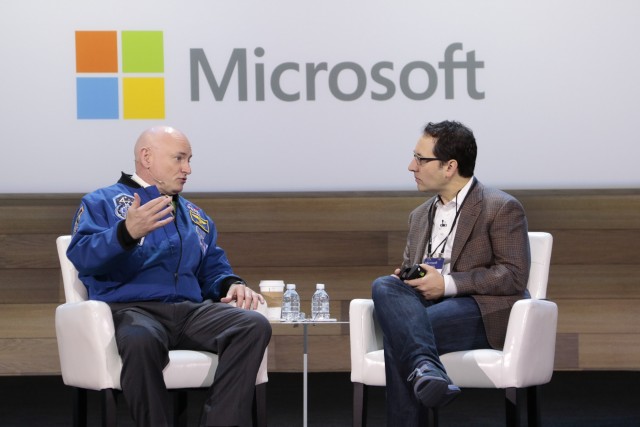 One of the highlights of the event was astronaut Captain Scott Kelly’s appearance on the keynote stage in a fireside chat with CMO Chris Caposella. And the most moving keynote award goes to Special Olympics Chairman Tim Shriver, who brought many in the auditorium to tears in a quest to get everyone committed to helping those in need.

One significant announcement at the event that many may have missed was Microsoft’s partnership with R3, a consortium of financial institutions, to help move Blockchain from hype to reality.

It’s fair to say that although the keynotes, many breakout sessions and some of the exhibit floorspace was aimed at business leaders, Microsoft still struggles to connect with a business audience. Despite this, I have no doubt the company must continue to make the shift to be more business-outcome oriented and customer obsessed. And it’s worth acknowledging just how far the company has already come in two years under Nadella’s leadership.

As might be expected, Microsoft’s Azure cloud services and Microsoft Dynamics were well represented at Envision. Microsoft highlighted recent Azure partnerships with BMW and Toyota to advance the connected car. (See digitizing the car for my POV). But what was most surprising to me personally was what was missing from Envision. Although HoloLens was mentioned in the opening keynotes, it was conspicuous in its absence from the exhibit floor. HoloLens sets Microsoft apart from many competitors: It gives the company an almost unique ability to create new sources of value for their business customers, but for some reason they left it out of this first ever business conference, at least from a hands-on perspective (Hololens featured heavily at Build). As I see it, the business potential for augmented reality is immense and Microsoft needs to press heavily on the gas pedal of HoloLens to open doors outside of IT.

With Envision 2016, Microsoft has put a stake in the ground. Business leaders have many demands on their time, and for many the Microsoft brand is synonymous with their laptop and the tools they use every day like Word, PowerPoint and Excel. In order to re-shape its image as a serious digital business partner in the minds of business leaders, Microsoft must invest heavily in brand marketing beyond the data center. Like many tech vendors, they could take a leaf out of the SalesForce marketing playbook and promote the amazing things their customers are doing more, and products less. After all, what really matters to business leaders are business outcomes.

Watch Out For TuringBots: A New Generation Of Software Development

Diego Lo Giudice 5 hours ago
(with Mike Gualtieri and Merve Kandemir) AI has been conquering the digital universe and all its planets. It’s now landed on the software development planet, as well. It already did so a few years ago, but now it’s about to take off. No worries, and let’s be clear, if you are a designer, a developer, […]
Read More
Blog

‘Tis The Season To Be Messaging

Christina McAllister 2 days ago
We look at a few ways that retailers can use messaging to support customers through the holidays and beyond.
Read More