Skip to content
< Blogs
Home > Featured Blogs > The End of Advertising, The Beginning of Relationships

Today my colleagues and I publish a bombshell of a report. Titled, “The End of Advertising As We Know It,” the report at first glance fits nicely into the current backlash against major publishers and ad networks, including Google and Facebook. Led by P&G Chief Brand Officer, Marc Pritchard, major advertisers like GE and JP Morgan Chase have been reexamining their digital display advertising spend and threatening to cut significant dollars out as they pressure companies like Google and Facebook to provide more transparency and ultimately more standardization into their ad reporting. It all adds up, as we show in an infographic excerpted here, to what feels like a revolt. 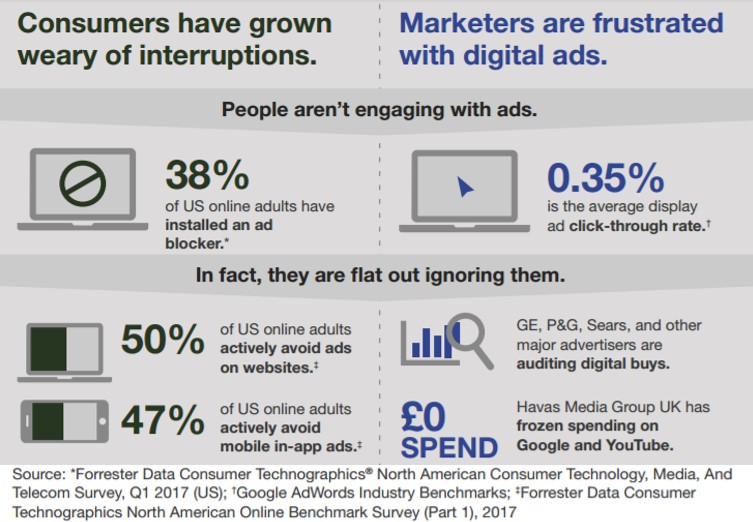 All of this is good, necessary, and moving in the right direction for the health of the digital advertising economy. You have to have confidence in what you’re buying and right now advertisers don’t, for very good reasons. But that is not why we’re declaring 2017 the year in which advertising as we know it comes to an end. Something bigger than that is happening. Or should be, if it’s not, and that’s why we wrote the report. What are we trying to make happen? It’s less about the mechanics of advertising and more about a shift consumers are about to go through. Put simply, the end of advertising is coming because interruptions are coming to an end. As I say in the report:

Consumers have options for getting what they want without interruptions. Interruptions have worked for a while now and still do in the digital age. Google made $79.4 billion last year by interrupting search results; Facebook made $26.9 billion in ad revenue by interrupting social interactions. But interruption only works if consumers spend time doing interruptible things on interruption-friendly devices. Once they can get what they want without leaving themselves open to interruptions — whether through voice interfaces or AI-driven background services — they will feel even more hostile to ad interruptions than they claim to today. That means the 38% of US online adult users already trending toward computer-based ad blocking and ad avoidance will continue to expand — not out of hostile consumer intent, but out of casual indifference to advertiser interests.

It is crucial that you understand precisely what I’m saying. People love to hate advertising, they always have and always will. It’s not the hate for advertising that spells its doom. Rather, it’s the “casual indifference to advertiser interests,” as I said in the above that will enable consumers to finally inhabit a world free of advertising. That casual indifference is only possible because people will spend less and less of their time “doing interruptible things on interruption-friendly devices.”

Interruptions are coming to an end. The report goes into much more detail, but you don’t need to think hard to envision a world in which Alexa answers most of the questions you search Google for today. Or a world just a few years beyond that where your persistent personal assistant (PPA) scrapes all the best bits from your Facebook feed and reads/shows it to you stripped of unnecessary things — including the top 10 concerts you don’t care that your friends went to as well as the advertising you are not interested in.

Marketers can fight this, publishers can fight this, but it will happen. The question remaining is what role will marketers play in that hypermediated world. Marketers should take 2017 as a two-for-one opportunity and choose to invest in building deeper relationships with their customers. Two-for-one in that they can put the pressure they want on Google by pulling money out of wasted digital impressions but rather than just banking it for shareholder value, they can and should begin investing in a phalanx of relationship technologies that will make this future possible. Those relationship technologies will include many of the things my smart colleagues are covering at Forrester like business intelligence (BI) solutions; cloud infrastructure to reduce cost and be more agile; marketing tech that offers a real-time, single view of the customer; customer experience processes; and specifically useful to the next wave of relationships, artificial intelligence that will drive a conversational relationship with your customer. That intelligent conversational relationship with the customer can begin now in chatbots on websites, in chat interfaces on mobile apps, in Alexa voice skills. The tech will make conversations more satisfying to customers, but it’s just as important that marketers learn how to make those conversations sparkle with the brand personality the CMO has committed the company to. This year, for example, Progressive could add Flo’s synthesized voice to a whole range of skills, apps, and bots, as a way to reinforce the brand’s personality. But it will only feel right if what she says in that voice is appropriate to your context, your need, and your emotional state. Companies are already struggling to figure out the tech, even if they don’t realize what it all adds up to. But we can assure them of failure if they do not pay attention to the personality they are conveying through that technology. Which is a mistake since personality will be fundamental to building emotional relationships.

This will take investment. And rather than ask the CFO to set aside new money, we recommend that marketers take billions of dollars ($2.9 billion to be precise, as we outline in the report) out of digital display advertising to make this investment. When they do, that will signal to everybody that the end of advertising is upon us. And that something much better is on its way.

See Why 2023 Fortune Favors The Bold And Focused

Explore our 2023 Predictions to see where strategies are shifting – and where opportunities for bold moves exist.

What The Justice Department’s Lawsuit Against Google Means For Marketers

Nikhil Lai 4 days ago
Yesterday, the US Department of Justice (DOJ) and eight states sued Google, accusing the company of illegally abusing its monopoly on the technology that powers online advertising. According to the Justice Department’s complaint, Google’s dominance enables the company to take at least $0.30 of every dollar spent using Google’s advertising technology. The DOJ is seeking […]
Read More