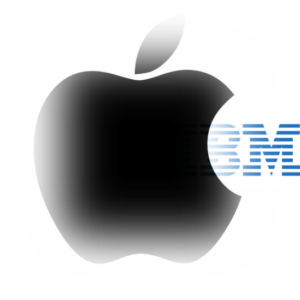 Why? It needs the company’s AI software Watson in its fight against Google, Facebook, Microsoft, and Amazon.

Apple is in a death match with these companies as they strive to trap consumers in their ecosystems via advertising monopolies, hardware lock-in, or no-profit commerce pricing.

A critical weapon in this war is natural language processing, a form of artificial intelligence. NLP enables machines to accurately understand the human voice, make sense of personal requests, and form credible answers. Amazon leads with Alexa, Google is a close second with Google Home, and Microsoft’s entry is Cortana. Apple’s perpetually annoying and undependable Siri has fallen behind.

The more computers can understand, the better the customer experience. By aggregating and analyzing large volumes of seemingly un-related data about people, the “GAMFA” players will potentially win more share for their individual ecosystems. And that’s where Watson comes in. By buying IBM, Apple would get the world-class machine learning platform — a system that is able to digest and analyze massive data sets to create the best recommendations and answers for business and for consumers. IBM has kept Watson focused on solving enterprise problems (hospitals, insurance companies), but its capabilities could be re-directed by Apple into advising consumers (next purchase, personal financial planning, personal health management). Watson has the potential to become an iPhone user’s “second brain.”

Apple could write the check tomorrow — it has $268 billion of cash reserves, and IBM’s purchase price would be in the $200-$250 billion range. Probability of deal? Low to nil. Apple would have to find another home for much of the IBM portfolio — perhaps Michael Dell would welcome some of it into his legacy kingdom. Additionally, Apple is focused on building a car, and that’s keeping it otherwise occupied. But hey, wouldn’t a car with a Watson brain be cool?

Customer Obsession And The CEO

George Colony August 31, 2020
Getting to customer-obsession is a complex, all-in effort that is more of a cause than a program. It flows directly from the heart of an organization – it’s about how you behave and what you value. Here's a rough map of how a CEO can lead this voyage.
Read More
Blog

George Colony June 4, 2020
To our black employees, clients, friends, and the black community at large, we stand with you against the injustice and inequities brought down on you. It’s not right, it can’t persist, and we can do better. We see you, we hear you, and we stand with you.
Read More