Skip to content
< Blogs
Home > Featured Blogs > Forecasting In Uncertainty: Despite The Pandemic, US Tech Jobs Grew In 2020, Led By Data And Security Positions

The US Bureau of Labor Statistics (BLS) released its 2020 occupational employment survey (OES) on March 31. We use this data for our estimates and forecast of US business and government spending on tech staff, utilizing both the data on tech jobs by industry and on average annual salaries for different tech positions. But the OES is also useful for insights on the state of demand for different types of tech-related work, as well as insights on which industries hired or laid off tech workers in the midst of 2020’s pandemic recession. Here are some key takeaways, starting with the occupational data and then shifting to the industry perspective.

US Tech Jobs Grew By 1.2%, With Data Scientists And Information Security Analysts Most In Demand 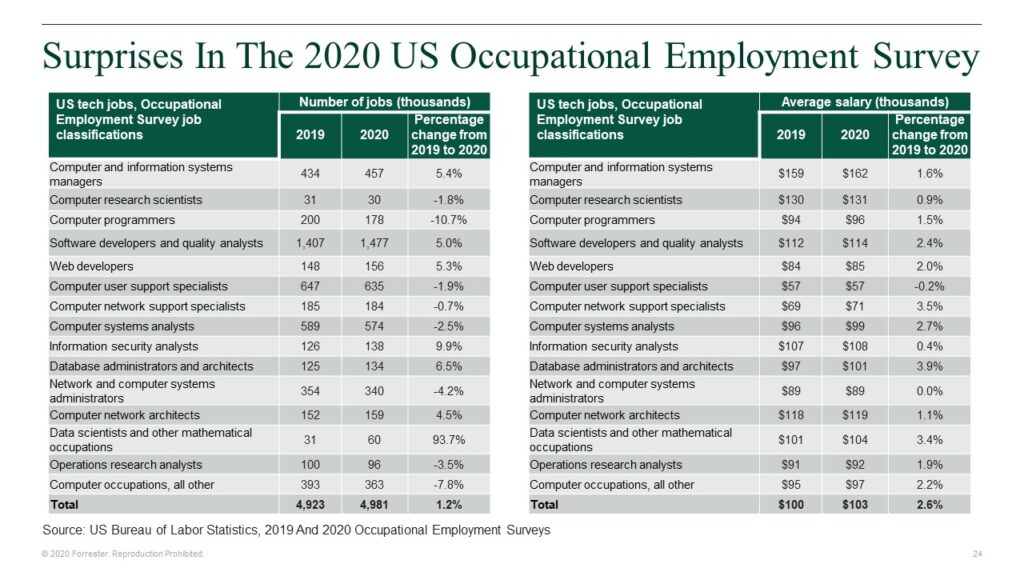 What makes the OES so useful to a tech market forecaster is its data on tech jobs by industry. Sifting through that data and making adjustments to separate out tech jobs involved in product development and support at tech vendors from those in IT departments, we found the following surprises (see next figure): 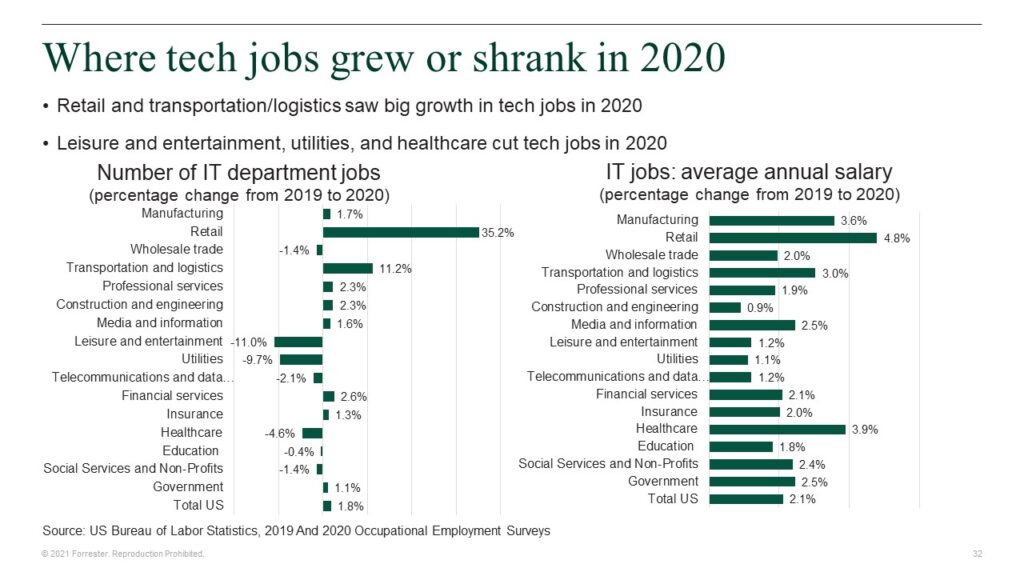 Implications For The 2021 US Tech Market Outlook

The OES report is one more sign that the 2020 pandemic recession was much less damaging to the US tech market than we had feared. At the same time, it does limit the growth potential for 2021 — with relatively few layoffs of tech workers in 2020, there is less room for rehiring. The e-commerce-related industries that ramped up hiring in 2020 may now be fully staffed, so our expectation is that tech job growth in 2021 will be moderate, in the 2% to 3% range. Given steady growth in jobs and continued low inflation, we think compensation growth will remain in the same range of 2% to 3%, so our forecast is that total spending on compensation and benefits for tech staff in IT departments will grow by around 5% in 2021.

Let us guide you to the next level of digital excellence. Drive growth, build powerhouse teams, quash disruptors.

The Art And Science Of Storytelling: An Interview With Bryan Yee

Christopher Gilchrist 5 days ago
In 2023, technology executives should optimize their budgets with customer and employee experience as the North Star. Here’s a peek at three actions we recommend in our new report, “Navigating The 2023 Downturn: Technology Executive" to help tech executives can position their companies for market leadership when the rebound comes.
Read More