Skip to content
< Blogs
Home > Featured Blogs > Gillette’s Close Shave: Its Latest Ad Is A Masterful Emotional Play Let Down By Its Execution

Brands are jumping into the messy arena of polarizing issues with greater fervor — and Gillette just raised the stakes. After 30 years of sitting on the sidelines, Gillette is passing its razor like a baton, with an overture that overtly calls masculinity into question. Within 72 hours of launch, Gillette’s “We Believe” TV spot skyrocketed past 13 million views on YouTube, attracting more than twice as many negative votes as positive ones.

The brand now faces a tidal wave of criticism from men and women, both liberal and conservative. Did Gillette make a huge mistake?

Forrester’s Consumer Energy Index measures the fundamental emotional forces that drive consumers to engage with or withdraw from a brand. By assessing Gillette’s consumer energy among US online adults between January 13 and 16, 2019 (see figure), we found that: 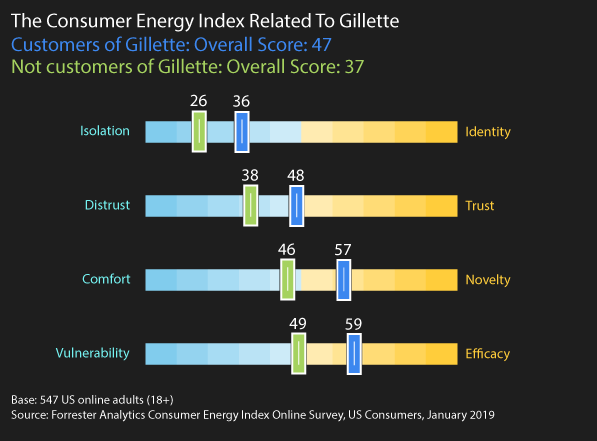 Given the brand’s context, timing, and creative execution, Gillette’s ad is a “Hail Mary,” not a slam dunk.

Gillette’s campaign targets a social tension that cuts deep; prepare for more brands to follow suit, as we predicted in our 2019 CMO predictions. In April 2017, we recognized that the days of “neutral” brands are over and that values-driven companies will engender the strongest consumer loyalty. By December 2018, we knew that Nike’s successful Colin Kaepernick ad was just a signal of more to come and that marketers would increasingly exploit cultural friction. But taking a stand here is challenging. CMOs must start by identifying:

As the fervor plays out and Gillette makes its next move, what can marketers learn from the triumphs and mistakes of this brand campaign? Find out in my next Forrester report. Stay tuned.

Discover the trends that will define B2B leaders' priorities in 2022 and learn what it will take to capitalize on them. Explore our guides, blog posts, podcasts, and more.

Phil Brunkard 3 days ago
There’s more to ensuring that technology enables business value than meets the eye. There is no single value proposition to communicating the value of technology to stakeholders. Each stakeholder perceives value differently. Value is in the eye of the beholder. You Think You “Deliver” Value To Business Stakeholders … But You Don’t Value for stakeholders […]
Read More
Blog

VivaTech 2022: From The Metaverse Hype To Green Tech Solutions

Thomas Husson 7 days ago
Paris was the center of innovation and technology last week. The 2022 edition of VivaTech in Paris was a great success with more than 90,000 in-person visitors and 300,000 digital connections. It has become the largest technology and innovation event in Europe with CEOs, C-leaders, VCs, and startups attending from all over the world. If […]
Read More