Multicloud is a real and increasingly strategic customer choice rather than an accident of poor or nonexistent planning. We all know that; I’ve written about it before.

Vendors of cloud tools and solutions are clearly aware of the multicloud trend as well and are moving to position themselves to best advantage. But there’s a problem: For too many, the focus of their ambition is to lead, control, or orchestrate the multicloud jumble that their customers face. Often, they might be better, more profitable, and more useful if they stayed in their current role: accepting that someone else might sometimes orchestrate them. 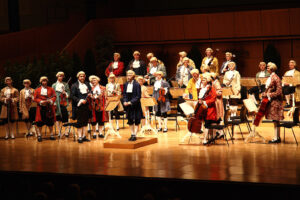 Let’s explore this with the help of an analogy. At times, that analogy may become painfully stretched, but please do bear with me — and it.

Imagine that a customer’s cloud computing estate is like an orchestra. It’s a mix of software-as-a-service (SaaS) applications — the string section? — infrastructure-as-a-service (IaaS) foundations — percussion, maybe? — and platform-as-a-service (PaaS) capabilities — the wind instruments. Each instrument, on its own, is played beautifully. Every musician is world-class. But, to work well together, the orchestra needs a conductor. The alternative is a rather unpleasant cacophony . . . or jazz.

Imagine your cloud vendors are all those world-class individual musicians. Your providers of productivity apps are Yo-Yo Ma and Vanessa-Mae. Your IaaS providers are Phil Collins (early-years Genesis, of course) and Roger Taylor (or a classical drummer, if I could think of one!). Acker Bilk and Louis Armstrong deliver the PaaS. All six are desperate to play for the Royal Scottish National Orchestra (of course), and Simon Rattle and Leonard Bernstein are keen to conduct.

So what will our excellent musicians do to win their place in the orchestra? You might think they’d practice their instrument. You might think they’d get used to playing in an ensemble instead of just soloing. You might think they’d double down on what they’re good at. But too often in this multicloud world of ours, they don’t do that. Instead, they make a grab for the conductor’s baton. “Look at me,” Acker yells. “I’m pretty good with the clarinet, and that means you should let me conduct your orchestra.” Not to be outdone, Roger Taylor rattles off an impressive drum solo and asks, “If I can do that, surely conducting can’t be too hard?” Simon and Leonard shake their heads in disbelief as members of the selection panel look as though they might seriously consider these claims.

Being a great flautist, violinist, cellist, drummer, or triangle player does not make you a great conductor. There’s a lot more to it than standing up and waving a stick. And yet, that’s exactly what a lot of cloud players appear to be doing. They know that they need to be in the multicloud orchestra and assume that the only place for them — they’re great, remember? — is up at the front, with the pointy stick. They deserve to be in charge. They deserve to be in control. And you, dear customer, should know that they understand this music (cloud) stuff. Please don’t be fooled.

Cloud companies do need to find their place in the multicloud orchestra. But for most of them, most of the time, that place is down in the pit, playing the instrument they’re good at and contributing to the symphony. It’s OK to let Simon or Leonard wave the stick; they’re pretty good at it, and it’s their job to make you sound good, too.

(Public domain image of an orchestra in costume, from Wikimedia Commons)

Preparing For The Future: The 2020s Will Demand More From Your Tech

Brian Hopkins 5 days ago
If ever there was a decade that announced itself so defiantly in the first year, it’s the 2020s. With so much change and volatility already, 2020 has proven this decade will be dramatically different than the one before it. It’s imperative that IT and business leaders prepare for 10 years unlike any others. For IT and business leaders, success in the 2010s meant capitalizing on innovative commercial IT (think cloud and mobile). […]
Read More
Blog

The Disruptive And Problem-Solving Potential Of Emerging Technologies In CPG, Healthcare, And Retail

Brian Hopkins 5 days ago
Emerging technology is always changing, so we wanted to understand the impact on different industries. In this audio series, we speak with our analyst colleagues Jeff Becker, George Lawrie, and Arielle Trzcinski to explore how emerging technologies are changing (and will in the future), even solving some of the most important and complex issues in four key sectors: consumer packaged goods (CPG), healthcare providers, healthcare insurers, and retail. In a world where […]
Read More