Forrester predicted in late 2018 that automation would become the tip of the digital transformation spear in 2019, impacting everything from infrastructure to customers to business models. Now that we’re four months in, we’ve evaluated whether our five specific predictions are on track.

We first predicted that 40% of enterprises will have automation centers and frameworks in place this year. It’s impossible to overstate the impact that automation will have on digital transformation and customer experience (CX). This prediction is mostly on track, although enterprises that Forrester speaks to are struggling with organizational questions such as accountability, where critical functions like AI design should be, and what types of new controls are needed to deal with the greater powers of advanced automation.

We also forecast that the robotic process automation (RPA) market will reach $1 billion in revenue by the end of 2019. Forrester’s growth projections for RPA ending in 2019 now appear to be low. Market growth is strong, with top players reporting thousands of customers. Investment dollars continue to flow into RPA platform companies. The top three RPA software companies are approaching values in excess of 10 billion. 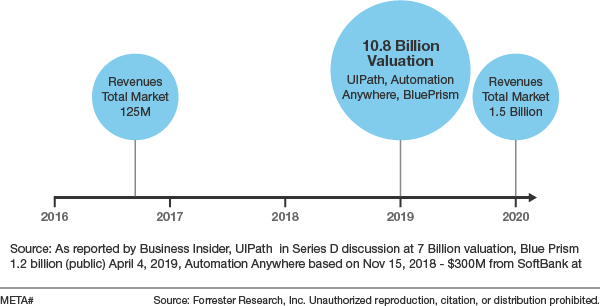 We’ve researched over the years how automation will affect the future of work. We predicted that by the end of 2019, 10% of US jobs will be lost to automation — but 3% equivalent jobs will be created. Automation technologies — broadly including software such as RPA, artificial intelligence, and physical robotics — will impact the job picture. In a report launching later this month, we now forecast a 16% overall US workforce reduction by 2030. Forrester predicts that one-tenth of startups will begin life with more digital workers than human ones.

The most successful companies in the world today run on software and employ fewer employees than their predecessors. Facebook employs only 25,000 people. It generates a staggering $1.6 million in revenue for each one. Apple generates $1.85 million per employee, and Google parent Alphabet generates $1.2 million.

Digital scale just has a different balance of land, capital, and labor. One ingredient has become less important, however: humans. Digital elites with skills in social media, data science, machine learning, and specialized automation are still needed, but the new form of scale does not have the balance of labor that previous types of automation did. Traditional scale added people to manufacture, sell, and fill orders. We are on track with this one.

Predictions 2019: Automation Will Become Central To Business Strategy And Operations

J.P. Gownder November 6, 2018
Automation will be central to the next phase of digital transformation, driving new levels of customer value such as faster delivery of products, higher quality and dependability, deeper personalization, and greater convenience. Last year, Forrester predicted that automation would reach a tipping point — altering the workforce, augmenting employees, and driving new levels of customer value. Since then, […]
Read More
Blog

Generative AI, Like ChatGPT, Won’t Destroy Creativity. It’ll Save It.

Subhendu Pattnaik January 9, 2023
Inflation woes, supply chain disruptions, economic headwinds, and an impeding slowdown cloud the visibility of what lies ahead. How do you brace for this economic upheaval? Delayed or inadequately thought-through decisions can have adverse impact on your business. Forrester has identified five key predictions for 2023, and this blog highlights three of them for India B2B marketing leaders.
Read More