In 2016, Snap launched its first-generation Spectacles: camera-equipped sunglasses that synced with the Snapchat mobile app. The latest release from Snap, the third-generation Spectacles, came in November 2019. At $380, they’re more than double the cost of the second generation, but the inclusion of 3D video capture makes them far more advanced. We recently had the opportunity to interview the team behind Snap Spectacles.

With two cameras mounted on either side of the sunglasses, Spectacles 3 captures the depth in the scene from the perspective of the wearer. Spectacles wearers record photos and videos hands-free and can transfer the recordings to their smartphone, where they can apply the 3D effects and lenses and create 3D experiences.

Some of the AR features made possible by Spectacles 3 in the mobile app include:

The AR effect is applied to the user’s video after uploading to the Snapchat app. 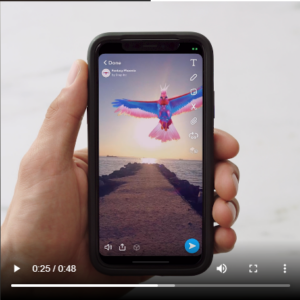 Check out Jeffrey Hammond’s and my research report, “Audio: The State Of Extended Reality (XR) In 2019.” Expect updated research on AR in late April.

If your company is building consumer AR experiences and is interested in participating in our research, please contact me at jask@forrester.com.

Brandon Purcell December 18, 2020
In 2020, one message in the AI market came through loud and clear: AI’s got some explaining to do! Explainable AI (XAI) has long been a fringe discipline in the broader world of AI and machine learning. It exists because many machine-learning models are either opaque or so convoluted that they defy human understanding. But […]
Read More