Technically, the male praying mantis mates for life. If you know anything about the mating habits of the female sex of that particular insect, you now also understand the limitations of the word “technically.” Similarly, technically, TLS 1.3 and DNS-over-HTTPS (DoH) are improvements upon previous technologies that are supposed to improve security. But in reality, TLS 1.3 and DoH will improve individuals’ privacy but will paradoxically reduce security in the on-premises enterprise environment over the short term.

TLS 1.3 and DoH are merely the latest salvos in a long battle between privacy activists and the surveillance, um, community that stretches back nearly as long as we’ve had browsers. The latest changes represent the penultimate end state, where all browser data and metadata is encrypted.

The Difficulty Of Enterprise Monitoring Over Time 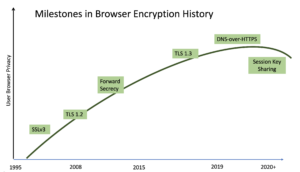 I cover network security controls and the network analytics and visibility space for Forrester. Many security tools such as enterprise firewalls, secure web gateways, and cloud access security brokers (CASBs) block users from going to known-bad websites by examining three key pieces of metadata in the encrypted traffic:

These three metadata will be disappearing from network traffic soon, and that will benefit human rights activists living in an oppressive regime, visiting journalists in hostile countries, and masses of people who can’t trust a sketchy ISP. But most Forrester security and risk clients are monitoring their users to protect them, not exploit them, and these changes make their lives more difficult.

For my report, “Maintain Security Visibility In The TLS 1.3 Era,” I interviewed over two dozen architects at vendors and clients to understand how they intend to counteract the loss of visibility in the short and long term. The report highlights the technical innovations and tools that security pros need to put in place in the coming years. During the months of research, several trends and insights surprised me, including:

The report, “Maintain Security Visibility In The TLS 1.3 Era,” is a tad more technical than a typical Forrester report. If you’d like assistance interpreting it, feel free to set up an inquiry with yours truly. Hope you enjoy the report!

Getting The Knack For NAC

Carlos Rivera 2 days ago
Network access control (NAC) was first offered in 2006 as a security solution that seemed promising but struggled to gain any interest for its adoption. This only worsened in the wake of anywhere-work and the move to the cloud, as on-premises networks declined in importance. Newer solutions such as Zero Trust network access (ZTNA), which […]
Read More
Blog