The Dell brand is one of the most recognizable in technology. It was born a hardware company in 1984 and deservedly rocketed to fame, but it has always been about the hardware. In 2009, its big Perot Systems acquisition marked the first real departure from this hardware heritage. While it made numerous software acquisitions, including some good ones like Scalent, Boomi, and KACE, it remains a marginal player in software. That is about to change.

About two weeks ago, Dell announced it formed a new software group. In itself, this is not necessarily big news, but what gets us excited about Dell’s potential to finally become a serious software player lies in the man they hired to lead this new group. The new President of Dell Software Group is none other than John Swainson, the same guy who rescued CA from the brink of collapse and turned it into a truly good software company. When John left CA, it was the best it had been in its entire history. It continues to be a strong company because he built it to endure.

John has a remarkable track record in software. He spent most of his career at IBM, eventually leading the Websphere business unit and his leadership of CA speaks for itself. If he can bring glory to CA, he can certainly help Dell. Dell has a long journey ahead to gain respect in software, but if Michael Dell and the board give him the support to do it, Dell can earn that respect. It would be wrong to assume that one man can save a company beyond repair. Dell is far from a lost cause, however. While it does face formidable challenges, the market generally likes Dell and wants it to succeed in the enterprise. This is critical. Now, Dell must let Swainson do what must be done to become that enterprise powerhouse.

Swainson's turnaround of CA focused on two key programs. Dell must let him do the same in his new role:

The bottom line here is that business is about people. The best products on Earth are nothing if you can't get people to rally behind them. John needs to instill trust in the people that Dell needs to thrive in the new world of technology. Customers, partners, and Dell employees themselves must all believe. A great leader inspires them to believe.

Indeed, the future of a technology company like Dell is neither pure software, nor pure hardware. Dell cannot merely emulate the software model of a CA and it certainly cannot cling to its hardware-dominant model of its past. Assets like the Scalent technology will help it build a stronger business in intelligent systems that can adapt to demand. Boomi brought assets for the software-as-a-service (SaaS) model that seems to be gobbling up all sorts of business functions. These all serve to augment the hardware and services businesses, and each other.

Converged, self-optimizing solutions like Dell’s Virtual Integrated System (VIS) represent an important future direction for Dell. The new data center will not rely on lots of low-cost servers like it has in the recent past. It will be based on integrated systems that combine server, network, storage, and a load of software to allow that combination to work with flexibility and reliability. VIS combines Scalent technology with other third-party and Dell-built software. Such systems are far from easy to build, integrate, and package properly. This is not necessarily a knock agains Dell; all such solutions are complex and require careful, well-engineered integration. With Swainson at the helm, Dell has a leader who knows how to deliver complex integration efforts like VIS.

We have seen this play before, where a company attempts to reinvent itself in a new mold. Sometimes it works, sometimes it does not. The difference is culture, but more importantly, the right leadership is the ultimate force. Steve Jobs changed the culture at Apple. AT&T's 1991 acquisiiton of NCR was a bold attempt to transform AT&T into a computer company. AT&T CEO Bob Allen's pitiful management of that period is now one of corporate history's worst examples of a reinvention attempt. You can "teach an old dog new tricks" but the dog must be open and willing to learn. Swainson's appointment is a strong signal that Dell is willing. Whether its culture is truly open remains to be seen.

What it means to I&O professionals: 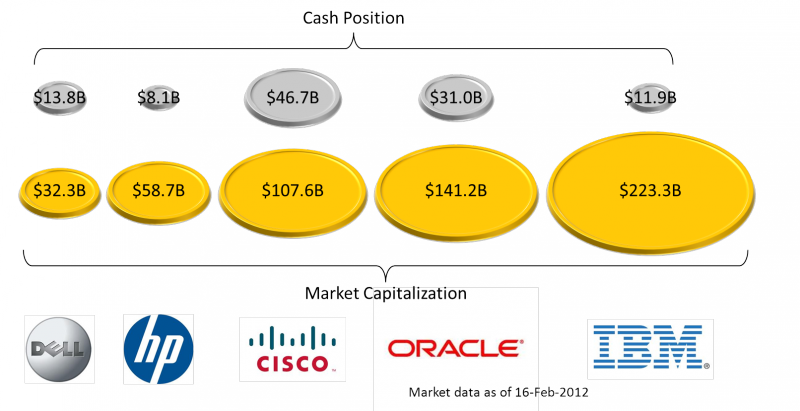 If you have written off Dell as a laggard for your sophisticated data center plans, you may want to give them a second chance. Clearly, Dell needs many more assets in its software portfolio, and time to execute on its software strategy, but most of all, it needs the right leadership. It now has that leadership. The next six months will tell you a lot about Swainson's impact. We expect him to make some audacious moves soon to indicate his intentions. An example would be a major acquisition. It has a good cash position as you can see in the chart. If Dell remains silent or ambivalent through this period, dump Dell. If the company does – as we expect – make some ambitious moves, Dell will be a very serious contender for your future data center.

Many thanks to my Forrester colleagues James Staten, Doug Washburn, Eveline Oehrlich, Dave Johnson, and Dave Bartoletti who contributed their wisdom to this post.