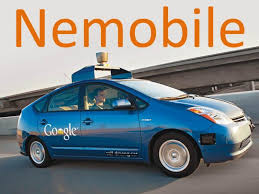 What are we going to call cars that drive themselves? The term “automobile” would be perfect, but that’s already taken.

“Nemo” means nobody in Latin — a car driven by no one would be called a “nemobile.” And you could call them “nemos” for short.

By the way, that’s nemo with a long “e” — pronounced like the fictitious fish or the commander of Jules Verne’s submarine the Nautilus.

By the way, if you are doubting that nemos will be on the scene anytime soon, consider this, as noted by Erik Brynjolfsson and Andrew McAfee in their excellent book Race Against The Machine:  In 2004, DARPA offered a prize for any autonomous vehicle that could navigate a 150-mile course in the Mojave Desert. The best performing nemo only travelled eight miles, and it took two hours to do that. But by 2010, Google’s self-driving cars had logged 1,000 miles on US highways.

Now fast forward to the summer of 2015 — Google reported that its cars had logged one million miles of autonomous driving. And in 2016, the Tesla S and X now offer easy-to-use and dependable autopilot — a very credible early form of self-driving.

Six years from now? Thousands of nemobiles will be safely driving on American roads.

Got a better name? I’d love to hear from you.