As more and more businesses move to cloud, the idea of rationalizing the number of vendors they work with and simplifying security continues to appeal to CISOs, CIOs, and CFOs alike. Fears of “lock in” are disregarded in favor of “good enough” and “integrated.”

With offerings spanning everything from the operating system to the cloud — and everything in between, it seems — Microsoft has achieved its goal of being a mega-security vendor. For Microsoft competitors — which is almost every vendor — this also makes the company an existential threat, especially if they compete in the security analytics, endpoint, identity, and email security markets. Microsoft has appeared in over 10 Forrester Waves™ focused on security and risk since 2019. Microsoft Sentinel is an example of how quickly the vendor is moving. Sentinel only launched in September 2019. Sentinel is positioned as a Leader in our latest version of “The Forrester Wave™: Security Analytics Platforms, Q4 2020” and Microsoft reports 9,000 users on the platform.

The next phase of Microsoft’s evolution as a cybersecurity vendor will be how it handles the defense of the territory captured from other vendors. 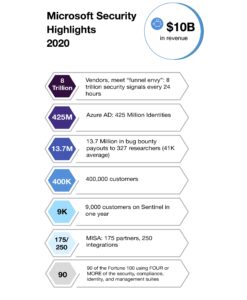 Joseph Blankenship March 4, 2019
Last April, we outlined how the “Tech Titans” (Amazon, Google, and Microsoft) were poised to change the cybersecurity landscape by introducing a new model for enterprises to consume cybersecurity solutions. Security has long been delivered as siloed solutions located on-premises. These solutions were hard to buy, hard to use, and existed in silos. Security leaders […]
Read More
Blog

Phil Brunkard 3 days ago
There’s more to ensuring that technology enables business value than meets the eye. There is no single value proposition to communicating the value of technology to stakeholders. Each stakeholder perceives value differently. Value is in the eye of the beholder. You Think You “Deliver” Value To Business Stakeholders … But You Don’t Value for stakeholders […]
Read More
Blog

What Merchants Want From Their Payments Provider

Nicole Murgia June 14, 2022
As part of the latest Forrester Wave evaluation of the merchant payment provider market, we spoke with 23 customer references (i.e., merchants like retailers and brands) about their experiences with their current payment provider.
Read More